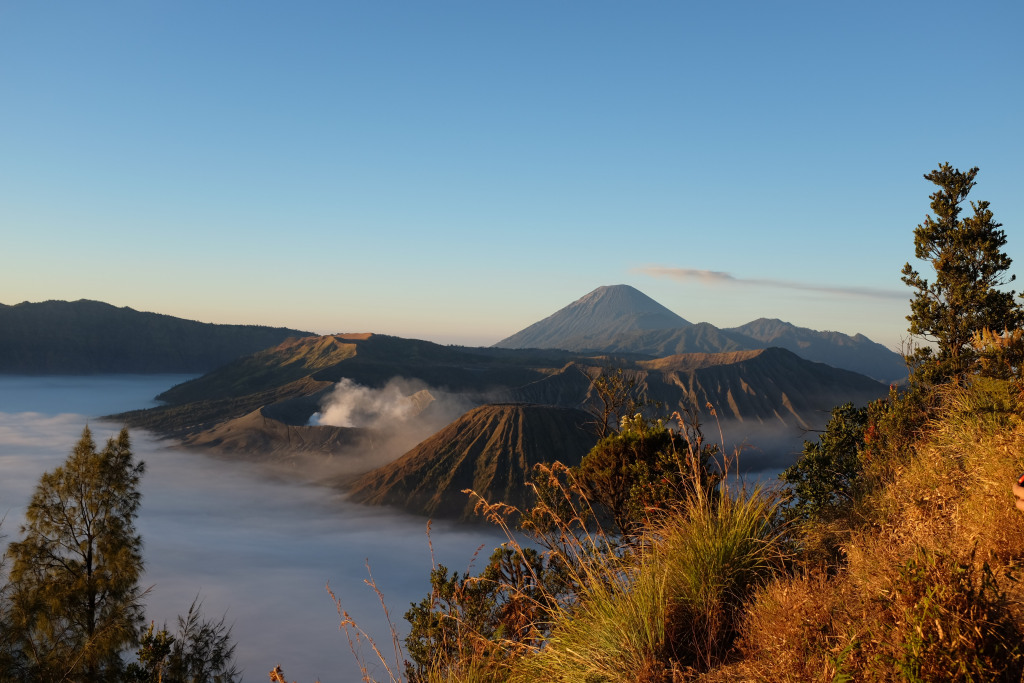 23 June in Insights by joanna

Centuries of cultural evolution, complex language, music, arts and the relatively new increased freedom of expression mark Indonesia. Today, Surabaya a culturally rich city is the passage to the peak of Javanese sacred Mount Bromo which offers spectacular highland and awareness of a spiritual dimension to everyday life.

Living based on ancient traditions and a worldview which differs substantially, in less than four hours Surabaya leads to a less tangible world, the Bromo Tengger Semeru National Park which spreads over 800 square kilometers in the Tengger region at East Java, Indonesia, where gods and spirits are celebrated and Western science is nonexistent.

Javanese often lead their lives according to their ancestral beliefs and journey to sacred sites with spectacular vantage grounds. Travel back in time today and embrace the otherworldly active Mount Bromo that rise at the floor of the caldera, where stars are dancing in the sky and mystical fog lies beneath lava-spewing peaks. Sink into the twilight and you’ll see what Javanese see in a lunar-like terrain where you welcome the sun gazing across the national parks landscape.

Glance across the crater ridge and journey up to make your way to the volcanic ‘Sea of Sand’ at the floor of the caldera. Today the passage is open and your viewing point for Mt. Bromo is at an altitude of 2,770 meters (9087.93 feet). Between the smoke and sand I made my way up to admire the mystic atmosphere taking my mind and heart to another dimension. You can hike right to the brim over the smoking caldera where many meditate and worship Ganesha, one of the most worshipped deities in the Hindu Tenggerese pantheon widely revered as the remover of obstacles, the patron of arts and sciences and the deva of intellect and wisdom. Tenggerese worshippers generally profess Hinduism as their religion, although they have incorporated many Buddhist and Animist elements.

In ’The Geomantic Year: A Calendar of Earth-Focused Festivals That Align the Planet with the Galaxy’ (2006:291) Richard Leviton stated that the Tenggerese who comprise about 600,000 people living in 30 villages in the Tengger Mountains near Bromo, climb the volcano during the time of the full moon and the Yadnya Kasada Festival and assemble at its rim where they offer the smoking volcano rice, fruit, vegetables, even livestock. They perform a ceremony where they take holy water to Bromo, while the villages at its feet turn cheery, the streets decorated with banners and penjors facing the mountain. The participants ask for blessings through Mount Bromo or the highest god.

The origin of the festival lies in the 15th century when a princess started the principality of Tengger with her husband, and the childless couple asked the gods for help in bearing children. The legend says the gods granted them 25 children, but on the provision that the youngest child be sacrificed in the crater of the volcano.

Today many arrive to witness the offerings ceremony and discover the mountain region. Spend a little more time in the small mountain village Cemoro Lawang in Probolinggo district near Mount Bromo and discover Javanese beliefs which developed over the millennia. The climate is much cooler, giving it the impression you are in a different country. This is your opportunity to connect back to basics and appreciate the simplicity in this gorgeous mountain village with many vegetable gardens and strawberry plantations.

Mount Bromo is surely a highlight, a scenic and mystical place you will always remember. Your four hour journey to Surabaya will allow you to indulge in a daydream visualizing local principles of living based on ancient traditions and admire a worldview which differs significantly.

In contrast to the Tengger terrain, Surabaya is the capital of East Java and one of Asia’s most important business and education centers with over six million people. The tooting of horns, thousands of motorcycles and night markets are a source of inspiration. The city was ruled by the Dutch over 350 years and the term city was translated in the past by locals to the ‘Dutch Centre’.  Today, you will find significant examples of 17-19th century Dutch architecture around the city.

The Indonesian writer Pramoedya Ananta Toer recalls “When I moved to Surabaya I picked up two new habits… smoking kretek and wearing shoes’’ A history of modern Indonesia by Adrian Vickers describes kretek as the original cigarette of the poor. A haji was first credited with the idea of impregnation tobacco with cloves and other spices in the 1880s, but kretek did not become manufactured until a Javanese entrepreneur, Nitisemito met a women street seller who taught him to package and sell them in 1906.

Today, you can visit the popular tourist attraction the House of Sampoerna which is an active tobacco factory. Some of the biggest tobacco-growing islands of Indonesia include Sumatra, Java, Bali, and Lombok, with a combined area of over 250,000 hectares under cultivation.

City dwellers will be also attracted by endless modern shopping malls and Chinese colourful temples. You get to explore many hidden paths where local kids will welcome you with a big smile, listened to traditional gamelan music and indulged in the comfort of your selected hotel or resort. The Surabayan cosmopolitan urban experience can form new ways of seeing the world. The Javanese view of the world, ethnics, linguistics, philosophical ideas and the existence of myth of spirits will bewilder your mind.

Tips
Don’t forget to bring a jacket as it is pretty cool when watching the sunrise over Mount Bromo. You can also rent a jacket at around 25k rupiah and buy a gloves at 15k rupiah.

Dates to remember
According to the Javanese calendar the Yadnya Kasada Festival is held once a year: 14 July to 15 August

Where to shop
Surabaya boasts some of South-East Asia’s largest shopping malls. Try to shop between May 1st and June 30th when the Surabaya big sale is on. Discounts up to 70% at this time.

Definitions
A penjor is basically a long tapered bamboo pole that is stood vertically in the ground, often on the roadside, and decorated in coconut leaves.